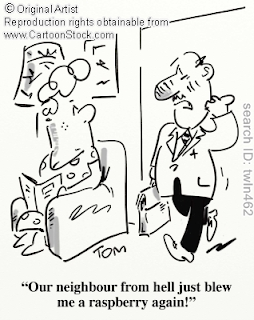 Okay, so we put in a bid, to be accepted by the end of the month if they do not get a better bid.  (Yeah, we low balled them because we knew they were desperate to sell).  The problem is our upstairs neighbours. Or as I call them, the neighbours from hell.  The daughter is about 15ish, and is.... how to put this delicately... a wanna-be gang whore.  The little gang bangers that come around are in and out, busting through the front door twice, fighting, threats of shooting.... blah, blah, blah.... Sometimes at these boys are fighting over this chick like she is the last woman on Earth...REALLY?  Meh, maybe she is the only one in the school who puts out.... anyway, I digress, because really, her sluttiness is really not the issue, just the problem it brings to our door.  On the particular issue of sluttiness, I am NOT going to throw stones from my glasshouse;)  Her mother is a bit of a trip, as she asked C at one time to keep an eye on her daughter.... uh... fuck no!  And she has drunkenly hit on both of us, individually of course.  I think I see who her daughter's role model is.

So last night we hear the mother and her boyfriend arguing, stuff being thrown about and thumping, nothing unusual.  It got louder, then we heard the daughter screaming "Stop it!  You're hurting her!"  Now, we mind our own business.  But I will be fucking damned if I let some dick beat up a women and just sit back.  Nope, sorry, no way.  We pounded on the door, and it suddenly went quiet.  C yelled through the door if she was all right, and no reply.  Well, we are not fucking buying that they are not home.  So finally I yell that we have to phone the cops if she doesn't say something.  Again, no reply, so we called the cops.  Now again, this is not my way.  I do not believe in calling the cops on noisy neighbours, but neighbours getting the shit kicked out of them.... yeppers.  Cops came and no answer on the door.  C let the cops in with his key, and they started.... sweet holy fuck, yelling and screaming at C.  Saying he had no business calling the cops.  C told them what we heard, and the mother yelled "You know Jen's a drama queen.  No one was getting hurt"  Then the cop asked a very obvious question: Why did she not come to the door when being checked on.  Then she replied "I don't have to answer the door if I don't feel like it." So today I am on a fact finding mission... Can we get rid of our upstairs neighbour if we buy the building, or are we going to e stuck with the tenants from hell?

Posted by jamiessmiles at 11:50 AM