So what is the biggest douche bag tattoo you have ever seen?  I mean the one that would have you breaking off friendships, deny the best sex of your life, deny a family member.  I saw a guy on the weekend, who, in large letters on his neck were the stylized words "Hard Core".  Really, a clear cut sign that he was not.  What the fuck was he thinking?  He may as well have "low self-esteem" or "small penis" branded on his forehead.

I swear to god, to represent his true nature: 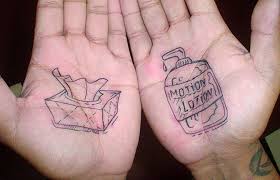 Now do not get me wrong, I love the expression of self in tattoos.  It is when people use them in place of an actual personality, or like they are an accomplishment in themselves that I think, FUCK ME, have you got your priorities screwed up.

Posted by jamiessmiles at 5:54 PM 3 comments:

They are going to get me in trouble.
Last night I was asked to go out with my friends.  I did not go.  Have I mentioned that my friends are assholes?  They went out.  Without me:'( 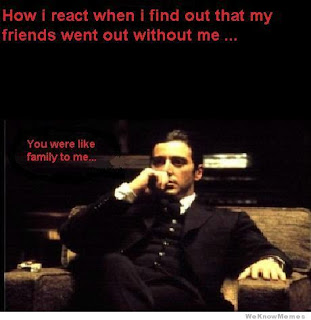 Nah, I'm kidding.  I was good with it.  What was not cool was the number of pictures they sent me all fucking night of men's junk.  I mean, haha once or twice, but all fucking night?  Really guys?  I need a better quality of friends.

Posted by jamiessmiles at 4:11 PM 4 comments:

I am back, but still feeling lazy as fuck.  We had a good time.  Relaxed, had fun.  Too much sun (C), too much drinking (me), so now it is slowly back to normal.  C, right now is looking for a new tattooist.  His friend who was doing his tattoo is going away for a couple of years.
I don't know what it is, but ever since mid-last week I have been feeling very blah.  At first I thought it was that bitch of a heat wave (and yeah, it did kind of fuck with our vacation), but now I think it is just weird.  I should be energized and ready to hit the ground running, but I am not.  Maybe it is because of the news that C's best friend is going to be in jail for a while.  I mean, I don't like the guy, but C does not exactly have a lot of people in his life from when he was younger.  Part of me feels guilty, because I really don't like C hanging around the guy.  I know, I sound like one of those people who doesn't want their partner around anyone but them, but that really isn't it.  It is this guy in particular.  And here is why:
1.  He was C's best drinking buddy.  And call me odd but it seems like hanging around the folks you used to drink with might lead to, well, drinking again.
2.  He always talks about the "party days", and talks about C like he was a superhero to alcoholics everywhere.
3.  He makes digs at C about me.   About being gay period.  I cannot understand for the life of me how he can be friends with someone who is so fucking rude and lacks respect for him as a person.

There, that is my rant.
Posted by jamiessmiles at 1:35 PM 4 comments: