The push to have children

In many ways I got lucky there.  Gay couples do not have that push to have children that straight couples do.  Sure, people will say things like "It's a shame you can't have kids", which is bullshit, but I generally do not reply.  Why?  Because people look at you like this: 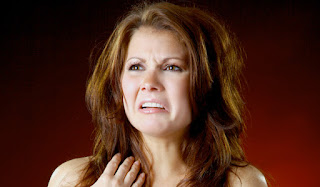 I mean, how is it possible?  What kind of a monster are you?  Having children what the best thing I ever did with my life.  It is what we are put on this planet to do.  What is your ultimate purpose if not to breed?

The argument to have kids tends to be linked to a lot of other societal bullshit too.  Like why gay's should not marry , or abortion should be illegal.  Let's examine a few: 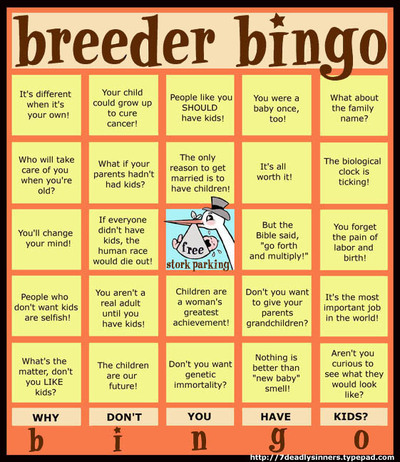 It's different when it is your own: Yep, I love my brothers, best part: I give them back at the end of the day.

Your child could grow up to cure cancer: Sure, or be the next Adolph Hitler... the possibilities are endless.
People like you should have kids... wait... shouldn't people who WANT to have kids have kids?  And people who don't should NOT? 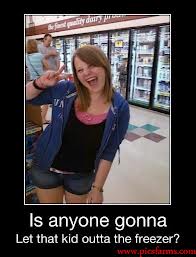 You were a baby once,too.  I can't even argue this logic:P
What about the family name?  Yeah, I don't think this argument is really valid anymore.
Who will take care of you when you are old?  Yeah, and it is those NOT having children who are selfish.  Reality check:Unconditional love is supposed to be something a parent gives, not expects back.  Have you ever MET a fucking teenager?
What if your parent's hadn't had kids?  Ummm, then I would not be here... And?  Do you really think I am that big of an egomaniac that I think the world would be missing a major component without me? 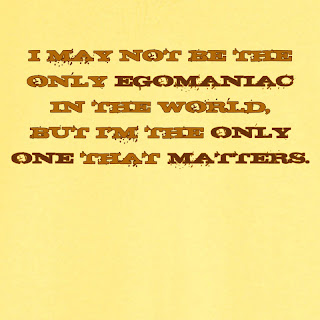 The only reason to get married is to have children.  WRONG, children are not even part of the marriage contract.
It's all worth it: TO YOU!  Good for YOU* 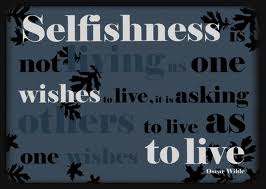 The biological clock is ticking- Really?  Because going out and having a kid is something you should do just in case you may want kids one day?

You change your mind... see above. 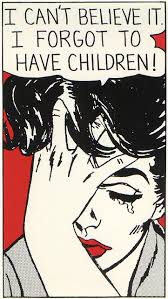 If everyone didn't have kids the human race would die out.... over 7 billion people on the planet, I think we're doing okay (if you don't count over-multiplying)
The bible.... yeah, let's not finish that one. 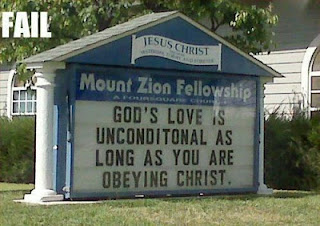 You forget the pain of labour and birth.... Does anyone really think this is what stops people from having kids?
People who don't want kids are selfish...  Well, I'm actually good with that.  Yes, I do not want kids because I feel they would get in the way of my goals.  Is that not an excellent reason NOT to have kids?
You aren't a real adult until you have kids... another thing I am good with.
Children are a woman's (person's) greatest achievement... How sad that we are still children that the best thing they will ever be is a baby machine. 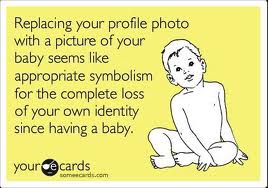 Don't you want to give your parent's grandchildren?  Ummm, why?  They chose the size of their family, why should they have a say in mine?
IT IS THE MOST IMPORTANT JOB IN THE WORLD!  Well, fuck me, I agree it is ONE of the most important jobs in the world.  Like a brain surgeon, maybe it is time we realize not everyone is qualified and leave it to those who are willing, able, and wanting to take the time to do the job well. 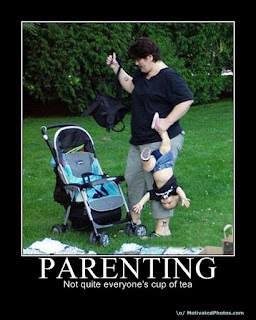 What's the matter, don't you like kids?  Some of them.  I like that I give them back too.
The children are our future.  Yep, and there are more than enough to keep up the species.  We are in no danger of extinction through lack of breeding. 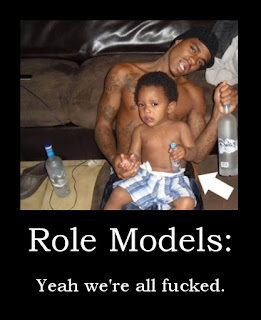 Don't you want genetic immortality?  Nope, I am not egotistical enough to think my genes offer so much more than everyone else's that humanity somehow needs it.

Nothing better than New baby smell.... well new car smell is pretty fucking awesome too;)
Aren't you curious to see what they would look like?  Wow, because nothing says great parenting like the excuse that you were just curious.

My all time fave was not on there though:

"But being a parent was the best thing I ever did in my life," or "I only wish I could have kids" 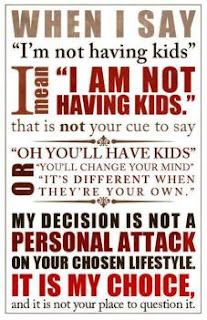 Posted by jamiessmiles at 6:40 AM 5 comments: Links to this post

My friend Ali, she really is a genius.
Her boyfriend is HUGE into comic-con and anime shit.  So he begged her to go to Comic-con, and sure enough she caved with the proviso that he went to Pride with her.  He probably would have come anyway, because he is a pretty cool guy.  Then he was begging her to dress in costume.

Yeah, she was so not into it.
He kept showing her costumes after costume...
Finally she said "Look, fine.  I will go to comic-con in what ever you want me to wear.... so long as YOU wear whatever I want when we go to pride."

Yeah, so she is not wearing a costume to Comic-con.

Though I wonder what she would have made him wear:D

Posted by jamiessmiles at 1:15 PM 5 comments: Links to this post

Saturday night I made a rookie mistake. I cannot explain why. I am not a rookie. After two years I know what makes C tick. I know the hot buttons. I know how to avoid things like this.

Let's take you back. C was watching a concert on television. Now, I actually enjoy listening to this while I am reading. Now, we have an agreement. Well, okay, not so much as an agreement, as I have trained Chris. See, when we used to “watch concerts” together here was the dialogue.

Side note here, Jamie knows shit about guitars... or wants to.

Two minutes later:
C- Look at how he does that, J.
Me- uh huh
C- No really look, see how he......*insert guitar player speak here*

This goes on, I shit you not, for the entire concert. The first time... well, we were still at the stage where I thought his little idiosyncrasies were cute. Yeah, that one wore on my nerves pretty fucking fast. By the second concert, about half way through I snapped, but then I came out looking like the asshole. So the third concert as soon as he started, one minute later I would say “Hey C listen to this” and read something excited out of my text books. It took about 5 times, every time he would interrupt me with insistence to look I would follow it a minute later with reading aloud. Finally I think he clued in.... Yeah, I give about as much about guitar playing as C does about veterinary medicine.

So with all that training you think I would be more careful. I made a comment on Joe Walsh, and how I liked his style. I even compared him to C's hero Clapton. Doh.... Stupid, Stupid, Stupid.... All day Sunday was spent trying to teach me the key points to the guitarists, how they differ, what their styles are, what they play......

Rookie mistake.
Posted by jamiessmiles at 10:33 AM 5 comments: Links to this post

I have a habit of pointing out first world problems when my friends bitch. Not to be a dick, they do it too. It is just funny how often you do bitch about them.
I actually told C.... I told you we need a bigger fridge. I can't fit the beer in with all the leftovers.... Yeah, first world problems.... Damn! He got me.
With the crazy bitch Mother Nature PMSing on Sunday we cancelled our BBQ, for the most part, which left us with a ton of food that had to be cooked. Not to mention several cases of beer.
Posted by jamiessmiles at 6:56 PM 9 comments: Links to this post

I'm pretty sure my baby brother is a genius

He may only be 2, but holy shit is the kid bright. 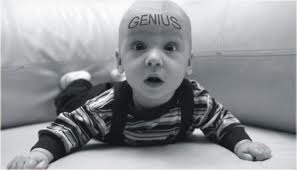 First: He plays chess.  No, not he plays with the pieces... he fucking knows the names of each piece (sadly his older brother can not claim the same, but castle and horse should BE what they are called), how each piece moves.  He hasn't won any games yet, but hell, I've never won against my dad either.  So sadly our records are kind of tied. 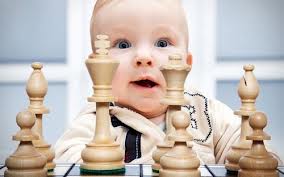 Second: My mother is on him about ordering things for himself.  Expressing himself.  On a flight home the flight attendant asked my mother what he wanted to drink he replied "Pepsi, no ice, please". 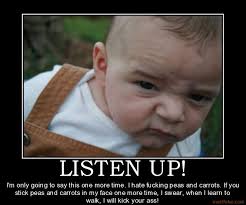 Third: He is nobody's fool.  While in my car he started playing with the window button.  Up, down, up, down, up, down.... you get it.  Well when I was able to distract him with horses I clicked on the window lock.  When he went back to the window and gave a sigh of frustration I said "SOrry, they must be broken", he glared at me and replied "No you locked them like Daddy does." 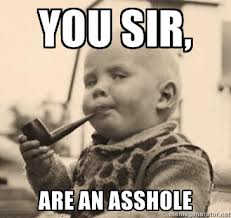 Finally: When we aren't sure what he is and is not allowed to do he will say "Mommy says yes" or "Mommy says no", as to what he is usually allowed.  When my mother told him he had to have a nap.  "Mommy says no."  "I am Mommy you little shit." 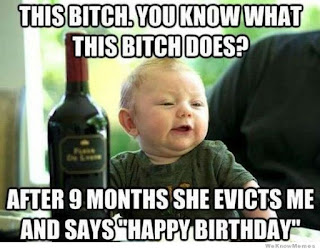 Close Case-man, but no cigar.  That was a rookie error.  You can't uses mommy says on mommy. 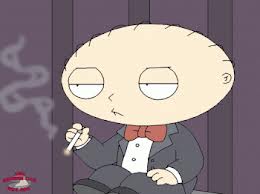 Posted by jamiessmiles at 5:32 PM 9 comments: Links to this post

I grocery shop a lot.  I prefer things that have not been frozen so generally every couple days I hit the grocery store.  Now, I refuse to go to the stores with the quarter deposit. 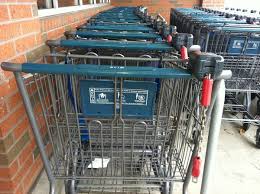 Now I know, what is the big deal, right?  But I find this system more than a little insulting.  First off it presupposes that I am too fucking lazy to put things back where they belong (shut up C).  But as if that weren't bad enough they think I am so fucking cheap that a quarter is going to motivate me.

I know they say it saves us money.  Well sure, I guess they can save you three cents on the jumbo package of toilet paper by not spending the money to pay someone to gather those carts.  Yep, that is a job that is no more.  I won't use self check outs either, or shop where they have them.  Slowly but surely our "convenience" and money saving tips are causing higher unemployment, and to tell you the truth, well, it pisses me off.  And as for passing the savings down, really?  More people unemployed, on assistance, and guess whose fucking taxes go up? Where is my three cents on toilet paper really getting me ahead.  I tend to shop at Sobey's.  24 hours, where they bag your groceries for you, don't hold my quarter hostage, and they fucking smile and are pleasant.  Why?  Perhaps because they are not stuck making minimum wage as management tries to make them redundant.

Yeah, I wasn't sure where I was going with this rant either...

Posted by jamiessmiles at 5:44 PM 6 comments: Links to this post