But to tell the truth the last few posts have been so fucking bitchy I did not want to post yet another post complaining about fucking everything.  Soooo.... Pride next weekend.  Yay!  I wish I could say I am really looking forward to it, but I would be lying.  I am just so tired lately.  But then, in three little weeks....
Oh but first, So this guy at C's work was selling Stag and Doe tickets.  I do not know if you people not from Canada do this, but basically everyone connected with the wedding is charged with selling tickets to the stag and doe, which is a party only MAYBE 1/5 of all who buy tickets go to, but it is considered somewhat rude not to buy the ticket when asked even if you have never met this person.  So C bought a ticket from this guy at work, with no intention of going.  The next day the guy is selling raffle tickets to same s&d.  Seriously?  you just got $25 out of the man now you are going to go for another $10?  So yeat again, C buys, not because he wants to, but because he does not want to appear to be cheap.  Because apparently not helping pay for strangers' wedding is YOU being cheap.  Yeah, I'm not a fan of the whole stag and doe bullshit.  I have no problem with the concept of fund raising, but not by selling tickets to people you hope have enough of a life not to show at some stranger's pre-wedding party.  You make money liquoring up your friends and family enough that bad decisions are made and awkward memories mar the wedding.  Geez people, get it right.
He fucking won the big prize.  Yeah, take that!  10 days in some cottage on the lake.   Yeah, in three weeks I am going to take a vacation.  10 days!  I am so fucking excited.  I love cottage country.  Mind you this is not where I am used to going.  This one is in Quebec.  Get me, world fucking traveller:P  It is only 30 minutes out of Ottawa, but it has some french name I can't remember, which makes it that much more uber cool.
So now I am going to brush up on my french.... nah, not really.  Just going to work.  Have a great day.

Finally, no connection to the post, but cutest pic I have seen this week and wanted to share: 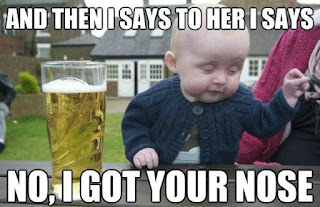 Posted by jamiessmiles at 8:16 AM